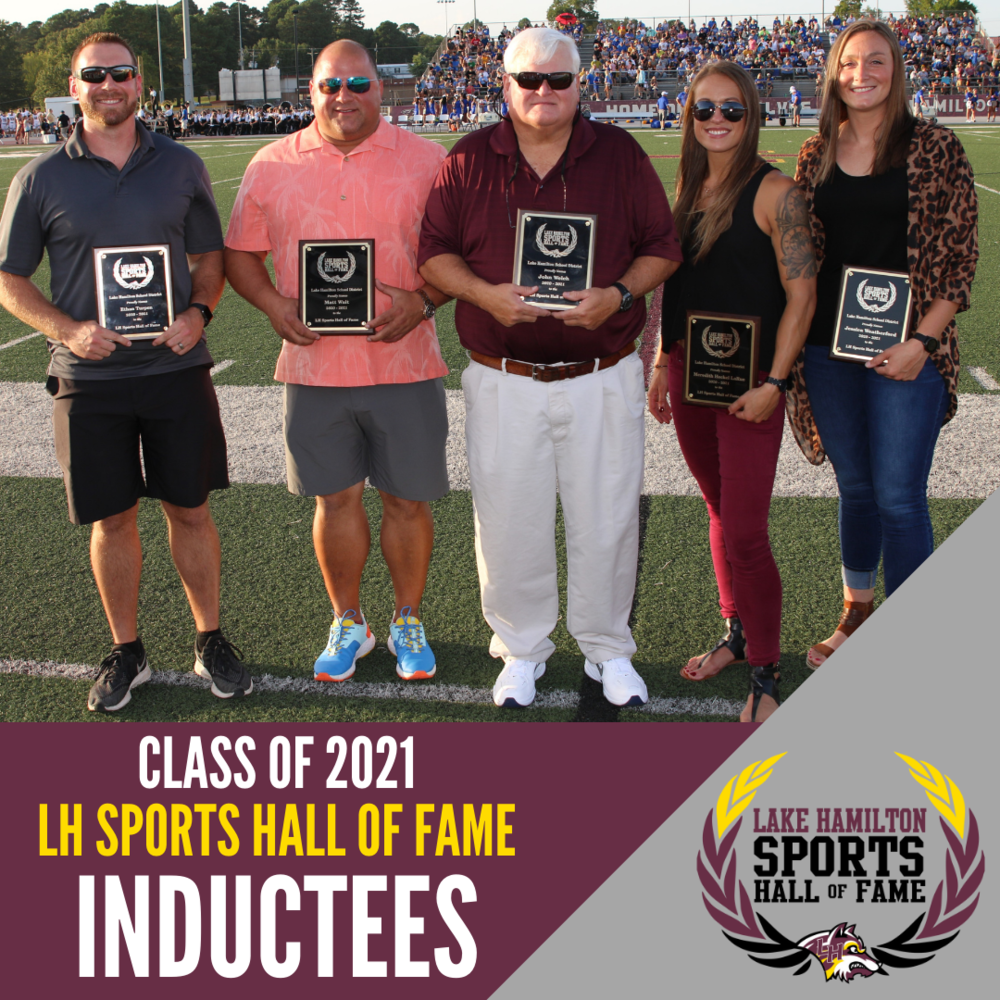 Congratulations to the following individuals for being inducted into the Lake Hamilton Sports Hall of Fame: Meredith Heckel Larue, Ethan Turpen, Matt Wait, Jessica Weatherford, and John Welch.  The induction was held on Friday, August 27, 2021, during the pre-game of the Lake Hamilton and Lakeside football game.  Check out their bios below!

Meredith Heckel Larue: Graduated from Lake Hamilton in 2004.  While at Lake Hamilton, Meredith was a member of the volleyball, basketball, and softball teams and received numerous honors and accolades:  all-conference (volleyball 2001, 2002, 2003) (basketball 2004) (softball 2002, 2003, 2004), all state tourney volleyball (2002, 2003), all state softball (2003, 2004), Arkansas all-star softball game.  Meredith attended the University of Arkansas at Monticello and played softball from 2004 to 2008.  While playing for the Cotton Blossoms, Meredith was chosen as GSC All-Conference (2004 – 2008), GSC Player of the Year (2007), 2ndTeam DII All American (2007), GSC West Co-Player of the Decade (2000-2010).  She graduated from UAM with a Marketing Degree in 2008.  Meredith has been married to her husband, Brad, for 8 years and has two sons, Braddox and Jack.  In her spare time, she enjoys doing Crossfit and making her boys better athletes than her and her husband.  Her most memorable moments at Lake Hamilton include: Making it to the state finals in softball at Lady Razorback Stadium her Junior year. Even though they came up short, it ignited a drive and passion in her that she knew she wanted to keep playing after high school. Also, though not a specific moment, but something that is memorable and she is forever grateful for is the impact Coach Barrett made on her life. Through him, she started to learn hard work, dedication, respect, and integrity. She feels he started the groundwork for her success as an athlete and as a person. He will always be a "memorable moment" in her eyes.

Matt Wait: Graduated from Lake Hamilton in 1993.  While at Lake Hamilton, Matt was a member of the football and baseball teams and received numerous honors and accolades:  all-conference for baseball and football, all-state for baseball and football, all-star team for baseball, a member of the undefeated 1992 state championship football team, and the USA Today All USA Team for Arkansas – Player of the Year as a tailback and punter.  He set the season rushing record (1700 yards) while at Lake Hamilton.  Matt attended the University of Arkansas and played football for the Razorbacks.  He was a 4-year starter and letterman from 1994 until 1997,  All-SEC freshman team in 1994, All-SEC 2nd Team in 1997, most career punts (252), most career punting yards (10,177), most punts in a season (1997), Steve Little Award (1997), SEC Western Division Champions (1995), and played in the Carquest Bowl (1995).  He received his BSBA in Financial Management and currently lives in Fayetteville, Arkansas with his wife, Robin.  Matt has three children and three grandchildren.  Two of his most memorable moments at Lake Hamilton include winning the 1992 state football championship and playing in the all-star baseball game at Baum Stadium in Fayetteville.

John Welch: Retired from the Lake Hamilton School District in 2015.  John was a teacher and coach at Lake Hamilton from 1982 until his retirement.  He coached football (defensive coordinator from 1982-2006, linebackers and special teams from 1982-2015) and track and field (shot and discus 1982-2015).  While at Lake Hamilton, John, his athletes, and teams received numerous honors and accolades:  John was the east-west all-star football game defensive line coach in 1993 under head coach Jerry Clay.  He was honored to coach, along with many other excellent coaches, the 1992 and 2008 Lake Hamilton football state championship teams as well as four state-runner up football teams at Lake Hamilton.  During his time coaching the linebackers, numerous athletes were chosen for all-conference and all-state.  As the coach of the shot and discus throwers at Lake Hamilton during his entire tenure, he coached numerous girls and boys who won state in the shot and discus.  He was also part of a track and field coaching staff that won 8 state championships in track and field (4 girls and 4 boys) and 16 state runner-up awards (6 girls and 10 boys).  His teams also won 16 conference championships and 24 conference runner-up awards.  Numerous track and field athletes won the individual state title and were named all-state throughout the years.  John received his degree from Arkansas Tech University.  While at Tech, he played football and was a member of the track and field team for the Wonderboys.  He is married to Diane, who was also a teacher in the Lake Hamilton School District for many years.  They have been married 40 years and have two sons:  Lucian and Logan, both teachers and coaches in Arkansas today.  Some of his most memorable moments at Lake Hamilton include winning the 1992 state football championship with an undefeated season, winning his first Arkansas Outdoor State Track and Field Championship with Coach Koonce, and having the opportunity to coach both of his sons in football and track at Lake Hamilton.